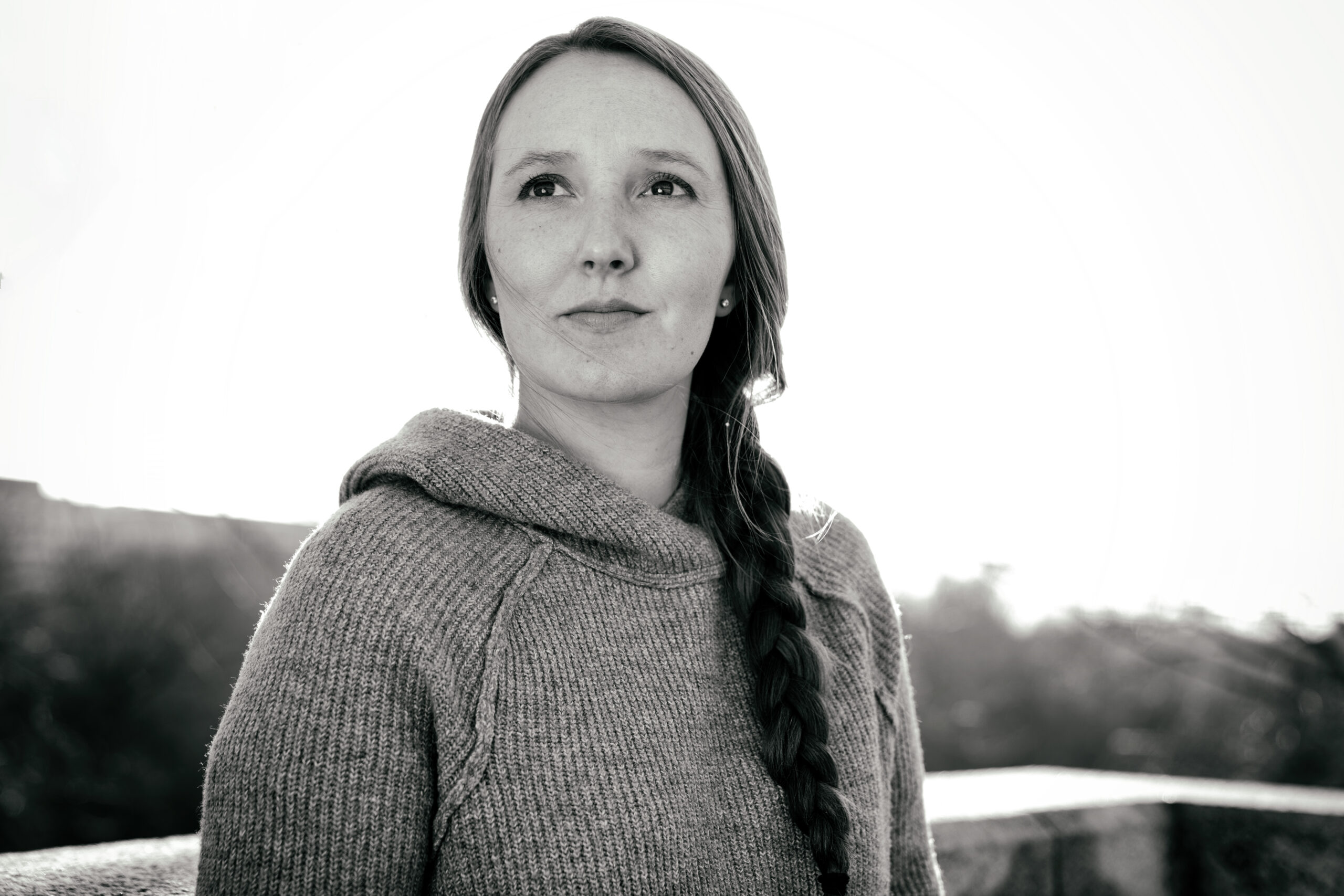 Callie Broaddus is founder and executive director of Reserva: The Youth Land Trust, which empowers young people to help protect threatened species and habitats through conservation, education, and storytelling. Reserva’s Dracula Youth Reserve in Ecuador is said to be the world’s first, entirely-youth funded reserve. Broaddus is a member of the Rainforest Trust Council, the Cool Earth Advisory Board, and serves on the boards of Exploring By the Seat of Your Pants and Bull Run Mountains Conservancy. She was named to the inaugural class of the Explorers Club 50: Fifty People Changing the World the World Needs to Know About.

Broaddus worked previously at National Geographic Kids and uses her photography and writing to document issues, including the sea level rise in the Marshall Islands, rhinos in Botswana, and research expeditions to the Ecuadorian Chocó. Broaddus received her BS in Architecture from the University of Virginia.

You were at COP26 – what was your takeaway from that experience?

You’ll hear a lot of different takes on COP26. Especially from young people because a lot of young people are frustrated. This was my second COP – I was fortunate enough to go to COP25 in Madrid – so I had one under my belt and knew how to navigate it. It’s incredibly overwhelming, the experience of being in a conference hall where 40,000 people are attending over the course of two weeks, trying to get every leader in the world to commit to saving ourselves, and where Barack Obama might just walk right by you.

There’s a lot of cynicism around about, Oh, well, there were 500 coal and fossil fuel lobbyists inside COP. Well, they were there because that’s where they know the power is now; people actually care about the climate. So they have to show up. And that’s something that gives me hope.

Another thing that gives me hope is the people I spoke to in every single venue – they really care about affecting change. And there was progress made. It’s just a big ship to turn around. So it is going to take time. And it’s going to be hard. And I’m really glad that at the end they said, we’re going to come back to the table again and revisit these commitments. I’m disappointed that the commitments that were made don’t keep us to 1.5 degrees. Coming into COP, though, it was much higher – over 2 degrees, close to 3 degrees, of warming. And now, after this agreement, it’s looking like 1.8. And, if we can come back next time, and if the engine of capitalism, frankly, is able to make coal and fossil fuels less appealing and make our alternative solutions more appealing, then it may be that we can turn the whole thing around.

So, you could easily look at this new commitment and say it’s worthless because of what we’ve seen [before]. But I’m going to look at it and say, Well, now we know how much more has to change in order to achieve this goal. You can look at the outcomes of COP however you decide to look at them. But it’s going to be what we do about these commitments that tells us whether COP was successful or not.

Can you talk about what led to founding your organization, Reserva?

Half of the world is under 31. So most people are pretty young. And we are growing up thinking about how different the Earth is going to be in 2050. It’s going to be a very difficult place to live in 30 years. And it is not healthy to have that idea, that vision of the future, and not be able to do something about it.

A lot of youth-led efforts center around activism, political change, and using your voice, showing up on the streets – and they’re really good. But we wanted to be a place for people who also wanted to make a direct impact: to fund critical protected areas entirely through youth-led efforts and donations from young people. And to take a holistic view of conservation, so we work really closely with our partner to make sure that young people are thought of in every step of conservation. And so that was really what helped me come up with this idea to start Reserva two and a half years ago.

But backing up a little bit. In 2018, I was asked to join the Rainforest Trust Advisory Council. And I was really taken aback because I did not feel remotely qualified. The Rainforest Trust had people on its council or board like E.O. Wilson and Thomas Lovejoy, who unfortunately just passed away. Russ Mittermeier. Peter Raven. Huge names in conservation. And I was not one of those. [Laughs.] I didn’t have a “doctor” in front of my name.

And I started thinking: How the heck am I going to earn my place among these giants? And I realized that I was the only person in that council that had a career focus in youth. Because I worked at National Geographic Kids. And then it dawned on me that I couldn’t think of a single protected area that had been funded entirely by youth. And I knew that young people could do that kind of thing. Because my sister, when she was 17, was diagnosed with an aggressively fatal cancer. And she basically channeled all of her energy into how she could continue to fight climate change while being sick. She had this idea to start a fund; she set a goal of raising $18,000 by her 18th birthday. She raised nearly $70,000 by her 18th birthday. To date, this fund has given out over $345,000 in grants to organizations fighting climate change. Seeing my sister have that battle and seeing what being able to do something about the things she cared about, how that helped her mentally as she’s dealing with her own mortality, that definitely altered my view of the climate crisis, the biodiversity crisis, and how people should be involved in it.

So I started Googling around, but there was nothing that was an entirely youth-led effort, youth-funded. And so I went to the Rainforest Trust CEO, and I pitched this idea to him of doing a single project, bringing in Nat Geo Kids, maybe, if I could figure that out, teaming up with Rainforest Trust. And he just said, “Absolutely. How come no one’s ever done that before?”

Do you see lessons that the older generations might learn from the younger ones in this work?

A lot of young people don’t care so much about the potential immediate fallout of taking drastic action, like getting off of fossil fuels more quickly than the global economists would say would be smart. They’re willing to accept that there is going to be a negative to that action. Because they see more clearly what the positive is. And so I think more older people need to focus on the end goal and recognize that the sooner we act, and the more quickly we act, the more that investment is going to pay off long-term.

If there’s something that you would say to people, particularly in the investment world, to focus on, what would it be?

Well, I’m going to make this a very practical ask: we need to divest from gold. Because everyone’s talking about fossil fuels, and of course it’s a problem for climate. But people are not looking at the biodiversity impact with the same scrutiny. And, if you are listening to this or reading this, and the idea of divesting from gold surprises you, then you have a lot of homework to do.

This is a metal that doesn’t really do stuff for us. It sits in our banks, and it sits on our wrists. And a very small amount of it goes into our electronics. But it’s not something we really, really need. And yet it’s a vector for crime in the Global South. There are huge humanitarian issues. There are huge human health implications – especially with mothers and young children getting mercury poisoning. Because gold and mercury love each other. They come out of the Earth together, and we use mercury to separate gold from the alluvial soils. And a lot of our financial systems revolve around gold. And so I would say one big impact you can have if you are someone in that financial sector is to analyze your investment in gold and help us get off that train. Because it’s a huge problem.

Are there times when the scale of the issues seems overwhelming, and you run out of fight, or hope?

Probably happens once a week. I think about how big these challenges are and how hard it is to be in this space. You’re constantly confronted with bad news.

So you have to develop a coping mechanism for that. For anyone whose job is to combat a seemingly insurmountable challenge, you have to make sure you have your coping mechanism really oiled up and running. For me, it comes down to bite-sized actions that I know make a difference. What we do in funding the protection of land that will disappear if we don’t take action is kind of like that starfish analogy that you’ve probably heard a million times. Yes, it’s not going to solve the entire problem, but it is going to solve the problem for that piece of land, for those animals, for those plants, and for many species that live there and only there.

If you try to focus on solving every single problem, it’s not possible. For me, learning to accept that is one part of the coping mechanism. Knowing that I cannot solve everything. But also getting excited around the things that you are doing. And, you have to develop trust in other people, that other people are going to step up and help solve the other problems that you can’t focus on.

How optimistic do you feel that, collectively, we can move things to a more sustainable, hospitable, planet Earth?

I’m very optimistic. Like I said earlier, half of the world is under 31. And so we have a generation that’s coming up that is, on the whole, more exposed to the threats and more aware of the possible solutions. And more and more, we’re being faced with our mortality all over the world – wildfires in Colorado, hurricanes in the Virgin Islands – so I’m optimistic that we will do enough to avert complete disaster because it’s human nature to want to preserve your own life.

People often talk about needing to find the solution to climate change. And one thing I would say is: We have all of the solutions. All of the solutions are out there. We just lack the willpower to harness them and use them to hit our targets. What I like to focus on is what I call solution-based optimism, which is that you’re more productive when you’re optimistic about your chances of success. And we can’t really afford to be any less productive than the most productive we can be. So we don’t have a choice but to be optimistic. You have to be. If you’re not, you’re part of the problem.

Terra Alpha Voices highlights thought leaders who are doing important work around the world. This series, created in partnership with author and photographer KK Ottesen, seeks to shed light on the subjects’ diverse perspectives rather than their illustrious careers.